Skip to content
George Rodrigue and I worked as a team on stage for many years. Recently, especially after he became ill, I filled in for him occasionally on my own; yet he was always there, coaching me beforehand and quizzing me afterwards.
(pictured, at the Clinton Library, Little Rock, Arkansas, 2010; click photo to enlarge-)

This weekend, for the first time, I’ll speak in public truly without him.  I’ve thought a lot about my half hour presentation—-how best to represent George and our foundation, and how best to honor Louisiana’s young artists, brought together for the 6thannual GRFA Art Scholarship Awards Ceremony.  (Details and ticket info here-).
I’ve also thought about how, during my first return to Louisiana in more than a year, to face and answer questions with both the sincerity George’s fans deserve and the discretion that I require.  It’s a complicated and emotional pursuit, and I doubt I’ll have an answer… even as my plane lands… even as I approach the stage.
(pictured: Soul Mates, an original silkscreen by George Rodrigue, Artist Proof, 1997)

As long as I knew him, George lived outside of the box.  This was true in his art, in our relationship, and in his joie de vivre.  He broke rules and took chances, and he taught me to do the same —to live by instinct and heart over establishment and expectations.
He wasn’t afraid, for example, of criticism that might accompany a short painting demonstration:

“I watched him paint that whole canvas in under an hour!”

…exclaimed on-lookers, some impressed and some, especially after learning the price, aghast.
(pictured: A painting demonstration for the LSU Museum of Art, 2011; click photo to enlarge-)

In 1997 George and I first entertained an audience with a painting demonstration at the Red River Revel in Shreveport, Louisiana.  As he painted, I shared George’s history, while clarifying his style and approach through anecdotes.

“I can’t talk and paint at the same time,” he laughed.

This began a tradition, and we found ourselves in demand across the United States.  We presented similar events at the National Arts Educators Association Convention, the Clinton Library in Little Rock, Arkansas, the Jule Collins Smith Museum of Fine Art at Auburn University, the Phoenix Art Museum, and numerous book fairs and schools.
For these demonstrations, we geared our unscripted banter to the audience.  George used large brushes and paint straight from the tube, an approach he developed for public painting because, he admitted,

“If I had to watch an artist paint for as long as it really takes, I’d get bored.”

He wanted his fans to see what appears to be a complete painting materialize from a blank canvas in under an hour, even if, in reality, it was only a rough design.
Subject matter usually included both the Blue Dog and the Oak Tree —visual aids that materialized before the audience’s eyes. In the loose sketch below, for example, painted during a 2001 lecture in Houston, Texas, George illustrates the simple elements that are the basis for his paintings. 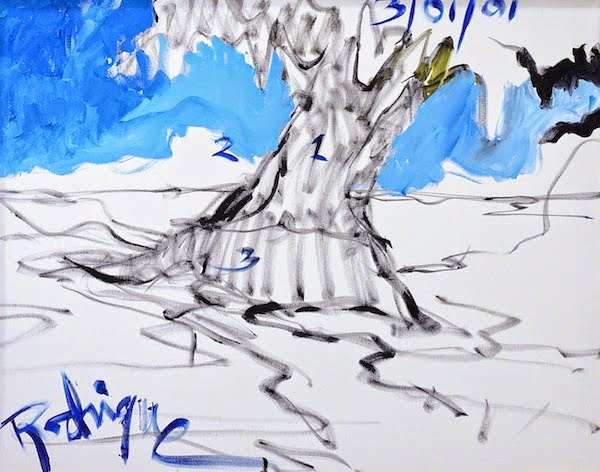 Using one of his typical landscape compositions, he emphasizes three components, each of equal importance on his canvas:  tree, background, and foreground.   He used these elements to create infinite arrangements of shapes.  This was the reason, he explained, that his paintings, even as he repeated the same subjects hundreds of times, remained varied and interesting to the eye.
Note:  The number “3,” which should indicate the foreground in the sketch above, is trapped instead inside of the oak.  After the lecture, George extended the trunk of the tree so that it better filled the space, creating a new bottom line to the oak’s shape, and covering part of the original foreground space.

Following the demonstration, George returned the painting to his studio where he reworked it for anywhere from several days to a week.  In the photo above, he shares the finished painting, My Second Birthday, completed in his Carmel, California studio following a painting and cooking presentation with Chef Paul Prudhomme. (story here)

“People thought it looked good on the stage,” he said.  “But I was never happy with it and always repainted it afterwards.”

Prior to these public painting demonstrations, George’s brushwork typically was tight.  However, influenced by his style on stage, he gradually loosened his approach on some canvases in the studio as well.  As a result many paintings since the late 1990s reveal looser, freer strokes.  Eventually, George admitted that, despite hundreds of tightly controlled compositions, one of his favorite ways to paint is to simply walk up to the canvas without any preconceived ideas.  He enjoyed working out a successful design based on the circumstances of the moment, while reflecting with honesty, his psyche.

“I know it will have a Blue Dog,” he said, “but beyond that, the challenge for me is in creating and just letting it happen.  That’s why my favorite painting is always the one I’m working on now.”

It is this approach, rather than a formal speech with lecture notes, that guides me on my return to the stage this weekend.  I’ll also unveil a few rarely seen paintings borrowed from the wall of George’s home studio.  My hope is that these symbols will embody, with both their personal and historical resonance, my partner’s influence, so that I might represent him well, with genuine and heartfelt sincerity during this auspicious event.
Wendy
-please join me in New Orleans on Saturday, April 18, 2015 for the George Rodrigue Foundation of the Arts Scholarship Luncheon, honoring 15 finalists from more than 600 statewide entries inspired by this year’s theme, “Louisiana’s Music.”  11:30 a.m. at the New Orleans Sheraton Hotel.  Details and tickets here- http://www.rodriguefoundation.org/site479.php
-don’t miss “Rodrigue:  Houston,” a special Texas exhibition opening this month.  Details here- https://georgerodrigue.com/rodrigue-houston/