Skip to content
George Rodrigue loves crawfish primarily as a symbol of Cajun culture.  The shellfish itself is deadly to him, inducing a closed throat and limited breathing.

“Soon after I did my crawfish festival poster, I developed practically overnight an allergy to crawfish.  Even the smell of the boil leaves me wheezing and my wife running for the phone and 911.” – G.R.

(pictured, Cajun Feast, a silkscreen from 2000)
Alas, we miss crawfish boils, lest George lose his life, a trade I weigh every spring with regards to the seafood and tradition I love.
As a kid, I recall sitting with my cousins on the curb anticipating the Grela Mardi Gras Parade on the West Bank of New Orleans.  We ate boiled crawfish from a large plastic trashcan, sometimes as early as 8:00 a.m., as we awaited the parade.  Today I miss that excitement, but I settle for my annual ride with the Krewe of Muses, a welcome distraction (story here). 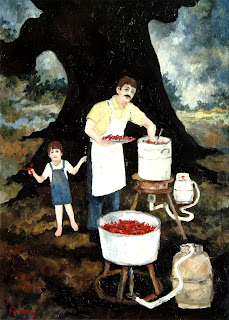 For George, the Breaux Bridge Crawfish Festival, celebrated this weekend (May 4-6, 2012), is an important distraction for more than twenty-five years.  For his 1984 poster, he painted friends, including his high school buddy Ed Vice (as the crawfish), Diane Bernard Keogh (as the Queen, but most often his Evangeline), and his long-time friend Ray Hay (in the chair, of Ray Hay’s Cajun Po-Boys, a restaurant in Houston).

Although posed in his backyard, George transfers the figures on canvas to a camp on the bayou, carefully aligning them within the tree, cabin and other elements, so that they stand timeless, trapped within a tradition.
Any thoughts on this poster?  I asked George Rodrigue.
“I love the Breaux Bridge sign and especially the zip code,” he said, with his trademark Snagglepuss-type laugh.
Years later, George contributed three works to the Schaeffer Eye Center/Beam’s Crawfish Boil in Birmingham, Alabama, all celebrating the Cajun favorite.
Boiling My Blues Away (1998) shows Birmingham’s signature Vulcan statue in the distance.

Dancing With the Crawfish (1999) looks back to Rodrigue’s earlier festival posters, along with a link to Cajun music.

The print Crawfish Boil is Rodrigue’s farewell gesture to the world of festival posters — not only his last for this festival, but also the year (2000) of his last poster for the New Orleans Jazz and Heritage Festival and his last for Neiman Marcus.  The period marks an end for Rodrigue of any commission-based series, as he turns the following year to Blue Dog Relief following September 11, 2001, Hurricane Katrina in 2005, and finally the George Rodrigue Foundation of the Arts, established in 2009.

We’ve thought a lot about the Crawfish Festival poster lately and the history of Louisiana festival posters in general as we watch artist Tony Bernard fill a long-empty niche.  As he explains in his Jazz Fest history, George Rodrigue feels these festival posters should be a venue for exposure for Louisiana artists.
“He’s the ‘Louisiana Festival Poster King!’” he exclaimed, when I asked George about Tony Bernard and his recent Breaux Bridge Crawfish Festival poster.  The comment came not with jealousy or sarcasm, but with pride and admiration, from one artist-friend to another, as George watched Tony develop within his art.

(pictured, the 2012 Breaux Bridge Crawfish Festival poster by Tony Bernard; read more about Tony and his posters in my latest story for Gambit Weekly, linked here-)
“Ten years ago Tony decided he wanted to get into portrait art,” explains George Rodrigue.  “So he took some portrait classes from an artist and after five weeks ended up teaching the class.  That’s the sign of an artist with confidence, making a difference.”

(pictured, Tony Bernard with his portrait of George Rodrigue’s sons, Andre and Jacques)

(pictured, Jacques Rodrigue (George’s son; Executive Director of the George Rodrigue Foundation of the Arts), Tony Bernard (Artist, George’s friend of more than twenty years), Bobby Jindal (Louisiana’s Governor, and the subject of Bernard’s official governor’s portrait), artist George Rodrigue)
George Rodrigue abandoned festival posters because his art took him in different directions.  Although he enjoyed the challenges for a while, he now looks back with a different attitude, including a powerful respect for the ‘festival poster artist.’

“After creating dozens of festival posters, I know the problem first-hand.  The artist faces the committee, general public, and his own ideas.  Tony Bernard’s art bridges all of these obstacles, and he continues creating artwork in a way that pleases everyone while also pleasing himself.”